1872, English immigrant Brainard Skinner established a small cannery in O’Connell Town, now the inner city Brisbane suburb of Windsor. Using the brand name Skinner’s Preserved Delicacies, he became well known for a range of goods, especially his Green Turtle Soup. He also canned meat and fruit, and even made a dugong paté.

In an article for the Windsor and Districts Historical Society, David Teague has explored the history of this Queensland company. Skinner’s Preserved Delicacies were advertised and sold in the southern colonies and were also exported to Britain. They took a prominent place in the Queensland displays at shows and exhibitions in Australia and Britain.

The turtle soup was made from turtles caught in Moreton Bay. It was supplied by appointment to several Queensland Governors and samples were even sent to the Prince and Princess of Wales. Skinner’s also offered beche-de-mer soup, potted prawns and shrimp and a several varieties of canned fish. 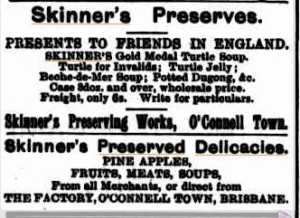 The Queenslander, in October 1874, described Skinner’s advantage in the market as a process that prevented over-cooking of the cans’ contents, writing that “The natural nutritious properties and flavor are retained unimpaired to any considerable degree”.

After Skinner died, his wife Catherine continued to exhibit the company’s products at Australian shows. She died in 1923 and it seems that the brand died with her.

Turtles and dugongs continued to be hunted through the first half of the 20th century, although both the supply of turtles and the demand for the produce had reduced markedly by the 1950s. Turtles were designated as protected in 1968 and commercial dugong fishing was prohibited in 1969.