Sliced and packaged bread was introduced in America as early as 1928 but the widespread adoption of the sliced loaf in Australia coincided with the rise of supermarkets. The Tip Top brand was launched in 1958 and was Australia’s first national bread brand.

The first packaged bread in Australia pre-dated Tip Top by more than 30 years. In the early 1920s, the Victorian Railways had their own bakery. Not only did they produce bread for the railway’s refreshment rooms – they also baked thousands of loaves of raisin bread each month. These were sold ‘hygienically wrapped’ – Victoria’s first wrapped bread. 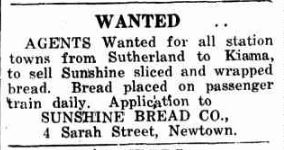 While individual bakers may have sliced bread for their customers, the earliest brand of sliced bread was probably made by the Sunshine Bread Company of Newtown in Sydney. From 1939 the company advertised for agents to distribute their bread which was shipped via the daily passenger trains from Newtown to places as far away as Kiama and Windsor.

During World War II, the US government briefly banned sliced bread because of “wasteful” packaging. In Australia, too, bread was no longer to be sliced or wrapped. The following article appeared in a Wagga Wagga newspaper in 1944:

The Department for War Organisation of Industry has flung a bomb shell among bakers and their customers. A Wagga master baker has received a letter from the department warning him against the practice of cutting, slicing, wrapping or branding bread in any manner whatsoever. This means that the master baker and bread distributors may not for the convenience of his customers cut up bread. It applies generally and Includes as customers organisations which run functions and which, in the past have arranged with bakers to slice loaves for their convenience. Bakers are warned to comply with the instruction of the department, otherwise the renewal of their licenses may be affected.

Even after the war, most households continued to have their bread – unsliced and unwrapped –  delivered by the local baker. In 1948-49, Australians ate on average 64kg of bread a year.

With the rise of self-service shopping in the 1950s and the introduction of supermarkets in the 1960s it became increasingly desirable to have bread available on the shelves.  Packaging was needed to maintain freshness and to differentiate brands. Additives that prolonged shelf-life of sliced and packaged bread were also required, as bread was less likely to be bought daily: mould inhibitors, softeners, emulsifiers, taste-enhancers, free-flowing agents, yeast stimulants, and stiffeners to reduce the rising time of the dough. 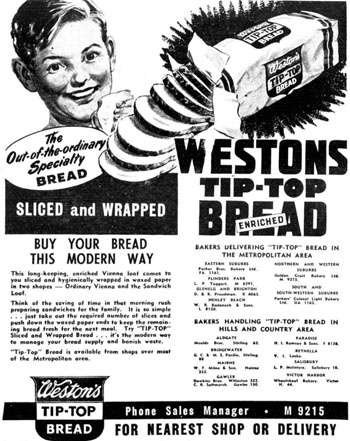 Over time, paper packaging was replaced by plastic bags, sealed with plastic clips. These clips were invented in 1952 and in 1954 the Kwik Lok Corporation was founded in America. This company, which also has branches in Canada, Australia, Japan, and Ireland, is still family owned and makes almost all the world’s bread clips.

Weston’s Tip Top was the first national bread brand, soon followed by others. For several decades, the standard Australian loaf was white, sliced and wrapped. But we rebelled. In the late 1970s, specialty bakers like John Downes began making sourdough. Baker’s Delight opened its first store in Melbourne in 1980, selling ‘bakery fresh’ bread in many variations.

Now the artisan bakery is back – Roy Morgan research found that specialty bread shops  held just over a quarter of the market in March 2017. But, they say, the supermarkets’ share is rising again. However, these days the supermarkets are not just selling  white sliced and packaged bread, but sourdough, whole grain, wholemeal and gluten free. When it comes to our daily bread, we’ve never had more choice.