The first serious attempt at commercial snail farming in Australia began in the mid-1980s and by 1987 Sonya Begg of Gunnedah, NSW, was supplying snails to leading hotels and restaurants. Ms Begg received a government grant of $2000 to research the ideal climate for snail farming. Among her early clients was Innovations restaurant in Canberra.

Although there is a record of one John Henshaw of Northcote, Melbourne, experimenting with raising snails for export as early as 1920, until the Gunnedah venture began canned snails were imported for the restaurant trade. Australian newspapers had been publishing articles about snail farming in France since the 1880s, but the eating of snails was seen by most as a somewhat disgusting foreign habit.

In 1883, The Age printed an article originally published in the English St James Gazette which described in some detail the history and practice of snail farming. The article began:

Much as we have been Gallicised by French plays, French music, French fashion in dress, and above all by French cookery, we have not yet carried imitation of our Continental neighbours so far as to allow the snail a place on our table. Englishmen who have roamed the continent half their lives…are rarely able to conquer the feeling of aversion with which the first sight of a boiled snail inspired them.

The writer admitted that snails were, indeed, eaten in the north of England, where  annual “snail fairs” were held in Lancashire. Snails were also thought to be excellent food for those suffering from consumption (tuberculosis). And their history in England stretched back to Roman times. The Romans were snail fanciers, with references to the farming of snails dating back to 49BC. They allegedly fed their snails on wine-soaked meal. But eating snails has an even longer history, with archeologists dating it to prehistoric times. 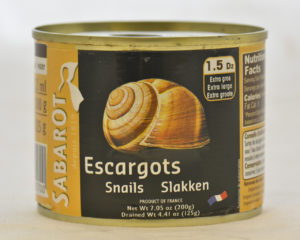 It seemed that Australians generally shared the English repugnance for snails, although small quantities of the canned varieties continued to be imported. In 1949 newspapers recorded that a  “departmental store” in Melbourne was offering tinned snails for the first time since 1939. A 14½  oz. (411g) tin was selling for ten shillings and threepence.

By 1953, it seems the smart set in England were overcoming their dislike of the molluscs.  Indeed, when Princess Margaret was spotted eating snails at L’Escargot restaurant in Soho, they became quite the fashion. There’s no evidence that Australians followed suit. It took a few more decades for our palates to evolve to a point where snails became, if not common, at least accepted on the menu of fine diners.

AgriFutures Australia considers snail farming a cottage industry and says it tends to be confined to areas where relationships between growers and restaurateurs have been established. Nonetheless, there are now snail farms in most states of Australia. The snail most commonly farmed is the Helix aspersa, or common brown garden snail, known to the French as the “petit gris”. It was introduced to Australia in around 1890.