During and after WWI, soldier settler schemes were initiated to provide a livelihood for returning servicemen.  Five years after the war ended, around nine million hectares had been allocated  to returned servicemen, establishing 23,000 farms across Australia. Much of the land was marginal and the failure rate was high; in Victoria by 1939, 60 per cent had left their blocks. The schemes were revived after WWII, with a somewhat better success rate. 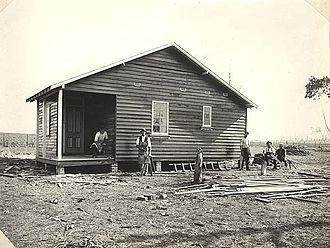 The Commonwealth Government’s role in soldier settlement was the selection and acquisition of land. State government authorities processed applications and granted land. South Australia was the first  to pass legislation, in 1915, followed over the next few years  by the other states.

Speaking of the soldier settler in Victoria’s Mallee district, historian Marilyn Lake said in an ABC program:  “They’re on land that is often marginal, that was never meant to support dairy farming or wheat farming. They are not even meant to or allowed to employ labour, so they’re often completely overworked. They have no capital. They go into debt to the government both to pay off the land but also the equipment of the farm itself. So all of these factors combine and many of them are on pensions, are on pensions for war wounds.”

As many soldier settlers left their farms, some of the holdings were eventually amalgamated into larger blocks which were generally more viable.  Nonetheless, most had stories of a very basic lifestyle at best and often of great hardship.