The Southern Cross Hotel was the first luxury hotel in Melbourne to depart from the traditional style of hotels like the Hotel Windsor. Part of the American Intercontinental hotel chain (owned by airline Pan-Am), it had vivid interior tiling decor, 17-second room service response time, shop, an American-style Grill Room and Melbourne’s first tenpin bowling alley. It hosted  the Beatles in 1964, but closed in 1995 and was demolished in 2003.

The site of the Southern Cross Hotel, on the corner of Exhibition and Bourke Streets, was once Melbourne’s Eastern Market. One of three markets established in Melbourne in the 1840s, it operated from 1847 until 1960 when the site was purchased for the development of the hotel.

The hotel was launched with much fanfare, with the opening event broadcast live on Melbourne television. As the first American-style hotel in town it attracted celebrity guests including Judy Garland, Frank Sinatra, Rock Hudson and Marlene Dietrich. But the Southern Cross Hotel is most remembered for the Beatles visit in 1964, when the street outside was crowded with screaming fans.

The hotel capitalised on the publicity with a newspaper advertisement, slipping in that the room rates were a very reasonable £4.4s ($8.40) a day. It doesn’t sound like much, but when you consider that the following year I began my first job on a wage of £10.10s (or 10 guineas) a week, it was probably quite expensive. 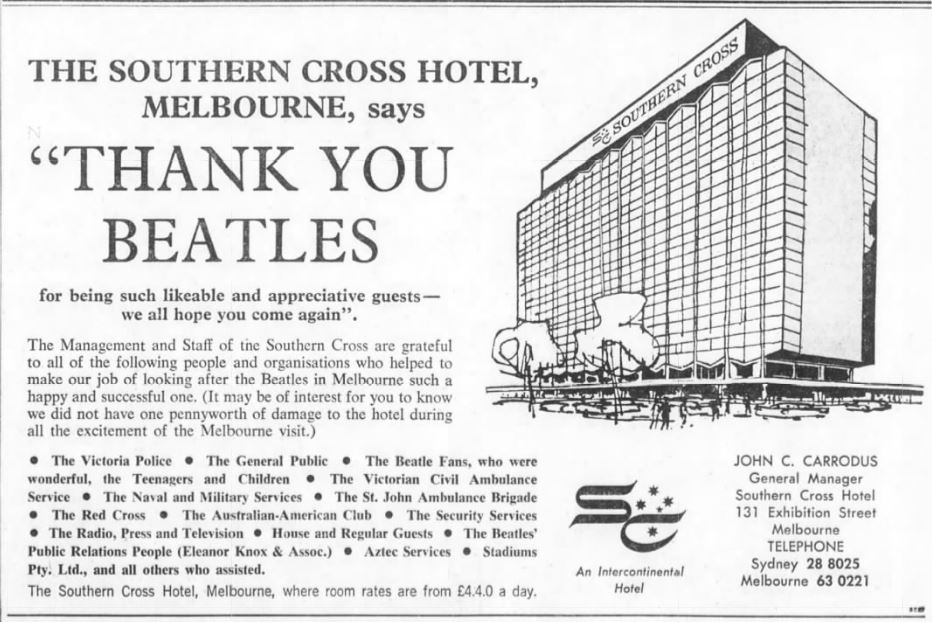 As an upmarket establishment, the Southern Cross had dress codes. Until the late 1960s, women were not admitted to the restaurant wearing pants. It was the era of the mini-skirt and the trouser suit. There’s a story that one fashionista, on being refused entry wearing her smart trouser suit, simply removed the pants and sashayed into the restaurant in the top half of the ensemble, wearing it as a very short mini. 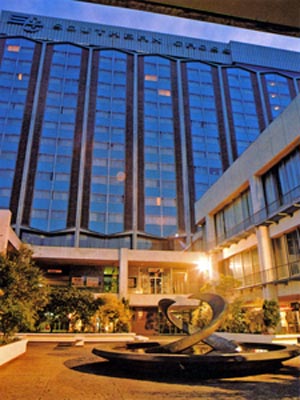 Well into the 1980s, the Southern Cross was the venue of choice for big events, in 1984 hosting the TV Week Logies, The Age/Caltex Sports Star Awards, the Victorian Wine Makers Exhibition and even the Australian Aerobic Championships. The Australis ballroom could accommodate 1600 people theatre style, or 1000 for a banquet and it boasted the largest convention facilities in Australia.

Pan Am sold its interest in the hotel in 1977, leaving it in Australian ownership until it was sold to the Republic of Nauru in 1994. The same year, the building was classified by the Heritage Council of Victoria and the stated intent of the new owners was to make extensive renovations. However, the promised renovations never happened and it was disclosed the building suffered from ‘concrete cancer’. The site was sold to developers in 1997.  The building was demolished in 2003 and replaced by an office tower.