Space Food Sticks were developed by Pillsbury in the USA. The company worked in conjunction with NASA to develop a rod-shaped emergency ration that could slide into an airtight port in an astronaut’s helmet. Sensing the commercial possibilities, Pillsbury released the product in America in 1969. Space Food Sticks were first sold in Australia by White Wings and launched here in 1971.

While Space Food Sticks were technically described as a “non-frozen balanced energy snack in rod form containing nutritionally balanced amounts of carbohydrate, fat and protein”, advertisements were a little more creative. The launch advertising in Australia described them as “the new ready to eat balanced energy snack that was developed for the astronauts”. 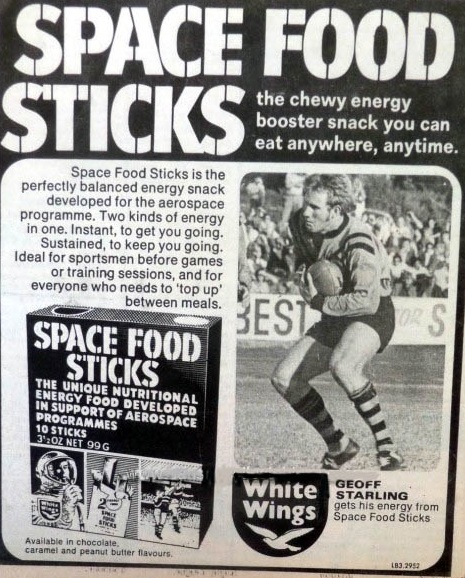 The nutritional claims for the product made them sound like a health food.  “More complete protein than fresh, whole milk,” the ads trumpeted.  With 68% “Instant Energy” (read sugar), they delivered fast energy to the brain and muscles – “ounce for ounce, more than a fresh picked apple”.  The bars also had 13% Endurance Energy (read fat). While the American versions came in  caramel, chocolate, malt, mint, orange and peanut butter flavours, Space Food Sticks were launched in Australia in just chocolate, peanut butter and caramel.

Space Food Sticks, or food bars very like them, were actually used by the Apollo astronauts on their moon missions. However, once the glamour of the moon walks wore off, the product lost its appeal. Pillsbury renamed them simply “Food Sticks” – a less than riveting brand name – and in the 1980s they were discontinued.

However, in Australia, they hung on. The brand was acquired from White Wings by Nestlé and renamed Starz Space Food Sticks. They continued to sell through supermarkets until 2014 and were evidently a favourite lunch-box item for a lot of Aussie kids. Playing on our nostalgia for things past, they were briefly revived in Australia in 2019 for the 50th anniversary of the first moonwalk.

Meanwhile, in the USA, the latest take on the product is a stick that contains cannabis.  A cannabis-infused high energy protein bar – what a buzz!