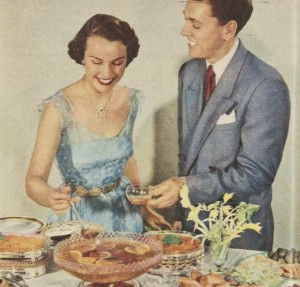 The recipe appeared in the July 9 issue of the Weekly in 1952 as part of a feature on party suppers. “Winter suppers should be hot, simple and appetising,” they burbled. “Remember, cold nights and energetic dancing sharpen appetites.” Other dishes in the feature included Jambolaya (a sausage casserole with rice), Baked Corn and Sausage Casserole (without rice) and Macaroni Milanaise, which included “5 or 6 sheep’s tongues (cooked, skinned and chopped)”.

Cook finely minced garlic and onion in melted shortening until lightly browned. Drain off surplus shortening, add steak. Wash and chop tomatoes, add to meat mixture with water or stock, sauce, salt and pepper, and herbs. Cover closely and simmer 1 ½  hours or until meat is tender. Cook spaghetti in boiling salted water, drain and fold into meat mixture. Turn into greased ovenware dish (suitable for serving). Top with a thick layer of coarsely grated cheese, dot generously with butter or substitute. Add tomato slices to garnish. Bake in moderate oven until top is bubbly and brown. Serve piping hot. Sufficient for about 6 to 8 servings.

In fact, there’s no such thing. The Italians insist that bolognese sauce, or ragù alla bolognese, should only be served with tagliatelle, a form of egg pasta. What’s more, the ribbons should be exactly 8mm wide. The official recipe for the ragu was determined by the Accademia Italiana della Cucina and notarised by the Bologna Chamber of Commerce in 1982. I wonder what those eminent signori would think of the Women’s Weekly version?

Of course, not knowing the approved recipe hasn’t stopped pretty much every cook in Australia from having a go at spaghetti bolognese. A survey by the Meat and Livestock people in 2009 found it was our third most preferred dish after steak and roast chicken. And more than a third of the people they spoke to prepared spag bol at least once a week.  They did another survey in 2012 and found that  94% of respondents cooked spaghetti bolognese  (which they, strangely, insisted on spelling ‘bolognaise’) often or sometimes.  It’s quick, it’s tasty, it’s cheap – so even if it’s not authentic, what’s not to love?