1869 Floating distillery on the SS Walrus

In 1869, a 100ft sailing ship was converted to steam and the SS Walrus began to sail up and down the rivers in Queensland’s Moreton Bay area as a floating sugar mill.  James “The Bosun” Stewart also obtained a licence to operate a rum distillery on the boat, using the molasses obtained from sugar milling.  The licence expired in 1872, but Stewart continued to operate the illegal still for a further 11 years. The pot still from the Walrus was used for the original Beenleigh rum. 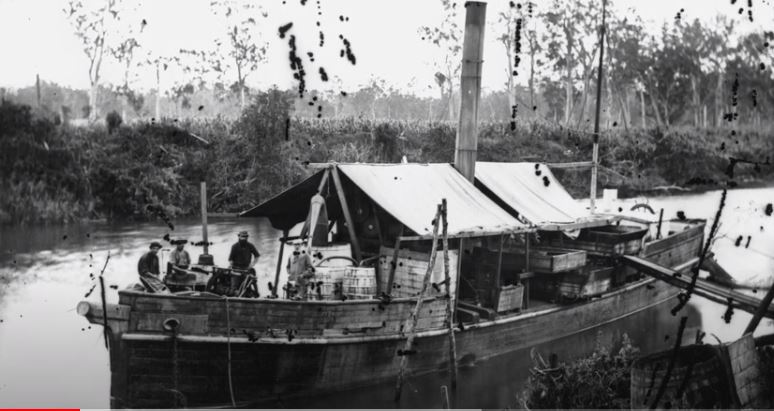 James Stewart’s company, the Pioneer Floating Sugar Company, fulfilled an important function for the small sugar growers along the rivers. His mill could crush two tons of sugar a day. However, it seems the pot still on his fore-deck was the most significant part of his business. In its first year, the company produced, or at least paid tax on, 14,000 gallons of rum. As other legal distilleries began to operate in the area, the Inspector of Distilleries refused to renew Stewart’s licence in 1872. Allegedly, Stewart ignored the ban.

It wasn’t always smooth sailing for the SS Walrus. In 1876 it was adrift at sea and expected to break up. The ship was salvaged by Samuel Crawford, who earned £500 for his trouble. Finally, in 1884, the ship ran aground on the banks of the Albert River. The pot still was still intact and Stewart sold it to two local cane farmers, Francis Gooding and John Davy. They had planted cane in the area between the two rivers in 1865 and had named their property Beenleigh after their home in England.

Gooding and Davy used the still to found the Beenleigh Rum Distillery, now Australia’s oldest working distillery. Beenleigh Rum was, for a time in the 1960s and 1970s, more popular than its rival, Bundaberg, but lost market share during several changes of ownership over the years.  It is now owned by Vok Beverages, a subsidiary of the South Australian beverage company, Bickford’s.

The SS Walrus is commemorated in an underground bar in Brisbane’s Regatta Hotel. There is also a photography of the floating distillery on display in Queensland’s famous Yatala Pie Shop. In 1945 a Royal Australian Navy training ship was named  Walrus in honour of the rum boat but was decommissioned in 1969. The fate of the original Walrus is unclear.