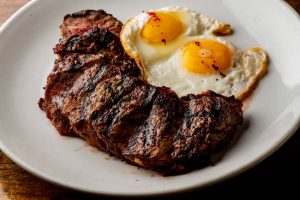 During the early to mid-20th century, steak and eggs was considered by many to be Australia’s national dish. In 1926, an unknown bard composed a poem celebrating the combination. It was published in the Perth Truth. Rump steak and eggs wasn’t a new dish. It was mentioned as a breakfast dish in Australian, English and American newspapers in the mid-19th century. However, by the time of World War II it was strongly identified with Australia.

From early colonial days, Australians were big meat eaters. Potential settlers were attracted by the promise of meat three times a day. And although the mutton chop was possibly the most famous (and infamous) of Australian meat dishes, beef steak was also widely consumed as the colonies began to prosper. It seems steak and eggs was a popular breakfast dish in the 19th century, in both the cities and rural areas. In one 1880 account of a “brumby chase” it featured as a hearty breakfast  beforehand.

By the 1920s it appears that steak and eggs was a staple at cafés and restaurants throughout Australia. By this time it was no longer confined to the breakfast table. The 1926 poem suggests it’s the only dish fit for a man-sized appetite, declaring:

All the delicacies of the planet have the wealth unto them guaranteed
But a dinner is only a dinner, and what a man needs is a feed.

The poet goes on to describe the “succulent cut of bovine”, eggs “softly but steadily whole”, the lot garnished with “steaming torpedoes of Murphy-delectable fruit”. The rhyme concludes:

Say, when I am dead and the daisies pluck nourishment out of my bones,
Just dish up the menu aforesaid somewhere in the cemet’ry zones,
And if I don’t rise up and eat it, well, then, I’ll be jiggered indeed,
For a Heaven is only a Heaven, but hot steak and eggs are a feed!

In the 1940s, the fighting forces agreed. According to Wikipedia, the United State Marine Corps copied the tradition of steak and eggs as a pre-landing breakfast from the Australian troops during WWII. During that conflict, a legendary aircraft was created out of the abandoned fuselage of a downed plane. Christened the “Steak and Eggs”, for more than a year it made unofficial supply runs between Australia and Port Moresby bringing fresh food to the troops.

Perhaps the military were enjoying the hearty dish more than Aussies at home. Although eggs weren’t actually rationed in Australia during WWII, they were often in short supply and were allocated to groups most in need. Cafés were forced to remove steak and eggs from their menus. Meat was rationed and Australians were urged to eat mutton rather than beef, ensuring adequate beef supplies for the armed forces.

In the post -war years the “national dish” continued to be a feature of Australian dining, particularly at Greek cafés. Chinese restaurants often had an alternative “Australian” menu, offering various grills.  The combination wasn’t necessarily a hit with post-war immigrants, but was evidently desirable enough for some visiting athletes during the Melbourne Olympic games to request what the Australians were eating rather than their own national cuisine.

Today, you wouldn’t find many who’d nominate steak and eggs as our national dish. The typical café brunch menu runs more to avocado and goats’ cheese on sourdough and our dining options reflect a more sophisticated approach to eating out. But perhaps there are still outposts catering to the simple tastes of yore. Or you can always cook this classic dish at home, perhaps following the directions of this housewife from 1951.