1984 Year of the Sticky Date Pudding

Sydney Morning Herald writer, David Dale, nominated Sticky Date Pudding as the signature dish of 1984.  The invention of the dish, known in the UK as Sticky Toffee Pudding,  is generally attributed to Francis Coulson of the Sharrow Bay Country House Hotel in England’s Lake District in 1960, although this has been challenged by writers from Scotland and Yorkshire.

Francis Coulson acquired the Sharrow Bay property in 1947, more or less inventing the concept of the country house hotel. He was joined in 1952 by Brian Sack, an ex-Spitfire pilot which, according to the official history ‘freed Mr Coulson to work in the kitchen’.

There are various stories about how Francis came upon the recipe for the sticky date pudding. One version suggests that Brian Sack had seen Canadian pilots using maple syrup during his time in the RAF, and this inspired the syrupy sauce.

Another story is that Coulson acquired the recipe from a Mrs Patricia Martin of The Old Rectory in Claughton, Lancashire and that she, in turn, had obtained the recipe from a Canadian friend. Mrs Martin evidently published her recipe in what later became The Good Food Guide Dinner Party Book. Either way, it seems there’s a Canadian connection. 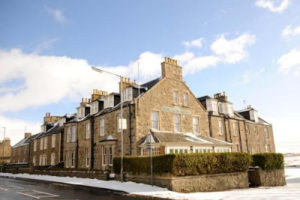 Another claimant to the invention of the sticky dessert is the Udny Arms Hotel in Newburgh-on-Ythan, Aberdeenshire. However, since it first appeared on the menu there in 1967 their claim is clearly bogus. A more serious challenge comes from Yorkshire, with the assertion that sticky toffee pudding was invented in 1907 by the landlady of the Gait Inn in Millington.  However, researchers have failed to confirm the authenticity of this claim.

All things considered, it appears that the Sharrow Bay team are the most likely candidates as the inventors of the dessert and hence of what we in Australia and New Zealand know as sticky date pudding. The recipe (which may or may not be how they do it at Sharrow Bay) is pretty simple, but not for the calorie conscious: