The first Streets Gaytime was not golden. It was a combination of icecream, chocolate and strawberry shortcake. The famous Golden version, with a biscuit coating surrounding toffee and vanilla ice cream, did not arrive until 1970. There have been a variety of flavours, but the Golden Gaytime is the one that has become an Australian food icon. 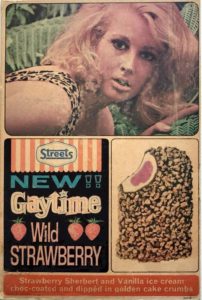 According to marketingmag.com.au there have been about 25 different flavours.  They say “The current and most successful one is the ‘Golden’ Gaytime, which was launched in the summer of 1970. Past flavours have included Strawberry Shortcake, Caramel Nut, King Chocolate, Raspberry Rough, Choc Orange, Cassata Roma, Devil’s Food (chocolate) and Turkish Delight.”

The Golden Gaytime arrived in the pre-Sydney Mardi Gras era, when the word ‘gay’ had yet to be applied to gender preference.  However, the name has proved resilient and even the line ‘It’s hard to have a Gaytime on your own’ has been embraced in full recognition of its new double meaning. In New Zealand, the same product is called a ‘Cookie Crumble’. Somehow ‘It’s hard to have a Cookie Crumble on your own’ doesn’t have quite the same ring to it.

The release of a Golden Gaytime icecream in a tub, in mid-2015, in response to a social media campaign by fans, has met with mixed reactions.  It’s the crumbs, you know.  They need to be on the outside, not mixed in – something of a challenge for icecream in a tub.