Actually, the Streets people themselves don’t know when this iconic Aussie ice cream was launched. They say it was “sometime in the 1950s”. But the trade mark was registered in August 1961, so 1962 (which is the date Wikipedia gives) seems likely. The original version was Lime Splice, with Raspberry Splice following in 1963.

Streets Splice combines an ice cream core with a “refreshing fruit ice shell”. There was also a mango flavour at some point. A range of real fruit icy poles released in 2011 used the Splice brand but didn’t have the ice cream heart. Splice multipacks were in supermarkets by 1979 backed by national advertising in Women’s Weekly.

The enduring star is the Pine-Lime Splice. It’s difficult to uncover the facts on when pineapple was added to the original lime flavour to produce this classic. It was definitely around in the summer of 1978, when this radio clip was recorded on 2SM.

In 2009, Qantas began to serve the Pine-Lime Splice as an all-Australian in-flight treat. Over the years the name has been co-opted for a cocktail (pineapple vodka, lime juice, egg white and sugar syrup shaken over ice, strained and garnished with the lime slice). Streets also used the name for vanilla ice cream with fruity swirls through it, sold in a tub. 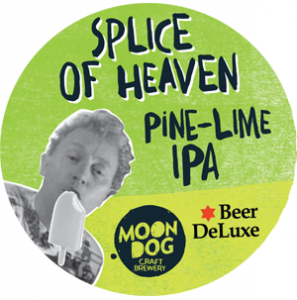 There has been a Pine-Lime Splice Big M milk flavour and Pine-Lime Splice Macarons (of course). One brave craft brewery has even created a beer, which they say is “fruitified with pineapple (and possibly lime)” and then “icecreamified”  with the addition of lactose. They admit that it sounds hideous, but contend that it’s remarkably drinkable. Developed specially for Good Beer Week in June 2015, it may or may not still be available direct from the brewery.

Getting back to ice cream, the Pine-Lime Splice, marketed as “the taste of summer”, is holding its own against competitors. In January 2015, Good Food rated it No. 2 behind the Golden Gaytime in a review of best Australian ice creams, writing:

Woah. Who was the genius who came up with the Splice, this magic combination of ice cream and icy pole? Surely they were given a nice corner office at Streets HQ and put up their feet until retirement, knowing perfection could never be topped. Even the name is badass, conjuring up images of a DNA splicing experiment gone horribly wrong. The tropical pine-lime flavour tastes like the Beach Boys’ song Kokomo – all palm trees, sandy beaches and sleazy guys in Hawaiian shirts playing the saxophone.

However, readers didn’t agree, knocking the Splice down to fourth place behind Streets Magnum and the Weiss Bar.