South Australian Robert Bowyer Smith developed the first Stump Jump Plough in 1876 and took out a patent the following year. The plough made it possible to till the soil in Mallee scrublands without grubbing out the stumps. The technology was not, at first, well accepted and he allowed his patent to lapse, whereupon other manufacturers began to capitalise on the idea. Smith was formally recognised as the plough’s inventor in 1882, receiving a bonus payment from the Parliament and a government land grant.

In the 1860s there was a push to expand wheat growing into the Mallee country of South Australia and Victoria. Before crops could be planted, the land had to be cleared of Mallee scrub – a small species of eucalyptus with large stumps at or below the ground. The South Australian government offered cheap land – by 1867 the rental had dropped to a penny an acre – but the difficulty of clearing the scrub led to a very low take-up by farmers.

Another South Australian, Charles Mullins, is credited with the invention of a device that, when dragged behind a bullock, knocked down the shrubby growth. It was left to dry and then burnt. However, stumps remained in the ground and caused problems when ploughing. Grubbing the stumps was a time consuming and back-breaking exercise.

The stump jump plough  was developed by Robert Smith in response to difficulties he had in ploughing his land at Kalkabury in South Australia’s Mallee country. His plough was exhibited at the Moonta show in 1877 and won first prize. Later perfected by Robert’s brother Clarence, the machine had levers that allowed the plough blades to rise out of the ground when they hit an obstacle. 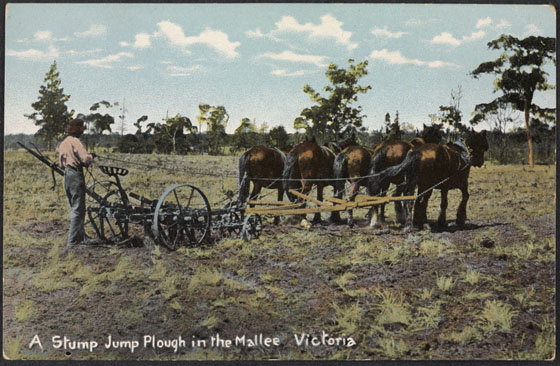 Initially the plough was ridiculed. Farmers jeered at the idea of planting wheat while leaving stumps in the ground. Robert  and his family endured lean years while the Smiths put their efforts into perfecting and promoting the machine. Meanwhile another pair, Charles Branson, a farmer, of Stockport, and James Winchester Stott an Alma blacksmith, claimed to have invented the “first practical stump jump plough”. There were other claimants, but Smith was eventually accepted as having designed the first machine of its kind.

Although Clarence was reportedly among its early detractors, he began manufacturing the stump jump plough commercially in 1880 and the Smith family company continued to produce them until the 1930s. However the Great Depression badly affected the business and the company was eventually closed down.