Sunshine Powdered Milk became a staple during the war years. It was often used to make up bottles for babies and could even be whipped to make ‘cream’ as this 1960s television commercial shows. It was also a favoured ingredient of damper. Initially made by Universal Milk Products of Broken Hill, it became part of the Nestlé range.

A process for making powdered milk was invented in Russia early in the 19th century, with the first commercial product made available thanks to a Russian chemist, M. Dirchoff, in 1832. The invention was reported in Australia in 1842 (and incorrectly attributed to a scientist named Kirchoff). In Dirchoff’s process “fresh milk is slowly evaporated by a very gentle heat, till it is reduced to a dry powder, which is to be kept perfectly dry in a bottle, well stopped, for use”. 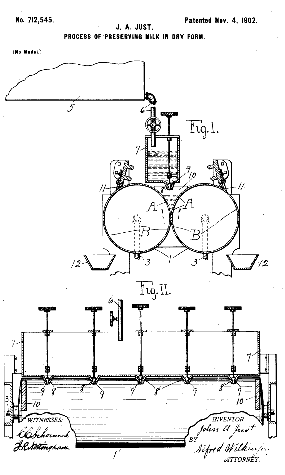 Over the next few decades, inventors and companies in England and the USA filed patents on various drying processes. However, it wasn’t until the first years of the 20th century that Australian dairy companies became interested. There were essentially two processes at the time: the Campbell process where the milk was concentrated and dried in rotating drums; and the Just-Hatmaker process where condensed milk was passed between two hot rollers and the resulting solids scraped off with a blade. The latter process was the one that found most favour in Australia.

In 1910, The Register (Adelaide) reported that two new companies were being formed in Australia to manufacture powdered milk. One was the Australian Dried Milk Company, which established a plant at Port Fairy. The Bacchus Marsh Concentrated Milk Company, already making tinned evaporated milk, also began producing the dried product near Camperdown in 1911.

Powdered milk was important as an export product and was soon recommended for baby food. The Bacchus Marsh company introduced its Lactogen baby food brand in 1919. Lactogen later became a Nestlé brand.

Nestlé was relatively late entering the powdered milk market in Australia, perhaps because its sweetened condensed milk was the mainstay of its business in this country. Their condensed milk had been introduced in 1880 and the first Australian factory established in Queensland in 1908.

Sunshine Full Cream Powdered Milk was first marketed under the Universal Milk Products brand and promoted with a program that allowed users to exchange labels for gifts. The gift program was curtailed because of wartime shortages. It seems that the Nestlé brand first appeared on the product in 1940.

Many local butter factories invested in the machinery to make dried milk, often using the skim left over from butter making. However, Sunshine was always promoted as a full cream product.