Sushi had appeared in Sydney restaurants as early as 1963 and by 1982 the Australian Women’s Weekly was telling people how to make it at home. But take-away sushi saw the Japanese favourite go mainstream. Melbourne’s first take-away sushi rolls appeared in 1995, while the Sushi World chain began in Chatswood, Sydney, in 1996.

As far back as 1921 Australians visiting Japan had discovered sushi. That year the Sunday Times in Sydney published an article titled Strange Meals Served in Jap. Restaurants that described the difference between nigiri sushi and gomoku domburi in some detail. But it remained a curiosity for travellers and as late as 1974 a travel article in the Women’s Weekly felt the need to explain what sushi was.

While there had been Japanese restaurants in Sydney since the late 1950s and in Melbourne since the 1970s, their numbers increased in the early 1980s. As Australians became more adventurous in their dining preferences, the popularity of sushi grew. For another decade, though, it was the preserve of restaurants.

It seems the first to sell take-away sushi rolls to the lunchtime crowd was Toshihiro Shindo who operated a stall called Sushi-Jin in the Target Centre food court at 246 Bourke Street, Melbourne. He started selling the rolls in 1995 and adapted them to suit Australian tastes, including ingredients like cooked chicken, beef and canned tuna.  Resisting calls to franchise his operation, Shindo sold his business in 2008.

In Sydney, it was a different story. The founder of Sushi World recognised that there was a gap in the market for a fast food that was perceived as healthier. The first Sushi World store opened at Chatswood in 1996 and, embracing franchising,  as of 2018 had 18 stores nationally. 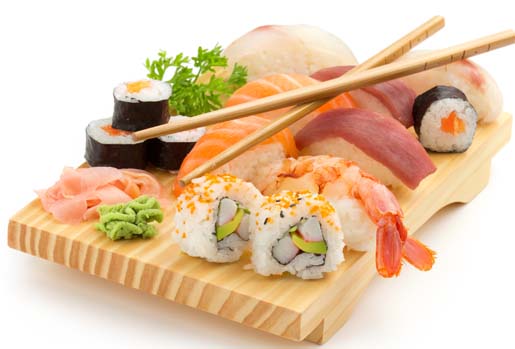 There is now plenty of competition.  In 1998 the first Sushi Sushi store opened in Melbourne’s “little Asia” suburb of Box Hill and now claims to be the largest take-away sushi chain in Australia, with more than 120 stores.

Coming later to the take-away sushi business was Sushi Hub, opening its first store in October 2006 in an alley in Cabramatta. By the end of 2018 this chain had close to 70 stores operating across New South Wales, Victoria, Queensland, Australian Capital Territory and Western Australia. Like other sushi chains, most of the outlets are in shopping centre food courts.

The take-away sushi experience in Australia is not particularly authentic. In Japan, sushi would not be served with wasabi on the side, for example. And those giant sushi rolls would not appear. Mr. Shindo was one of the few Japanese proprietors of a sushi business. Most are run by Australians, Chinese or Koreans.

The health claims for sushi are open to debate as well. It’s definitely not low-carb, since the principal ingredient is rice. Fish is good, seaweed is good, but once you start adding fried bits and pieces and mayonnaise – not so good.  Health experts suggest making it a treat, not a staple.