Until the 1960s, if you wanted to wine and dine in Tasmania your options were restricted. There were fancy meals in first-class hotels such as the Wrest Point Riviera in the south or the Launceston Hotel in the north, or basic counter meals in pubs. Pressure from the industry brought about changes to licensing laws. The first fully licensed restaurant was the Martini in Burnie. 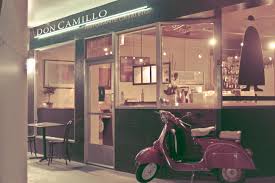 The same year the Mona Lisa (or as some sources have it, the Monna Lisa) restaurant became Hobart’s first licensed restaurant. It was followed in 1969 by the Astoria, the Don Camillo, the Dutch Inn and the Scotch Thistle in Ross.

One informal restaurant in Hobart had circumvented the licensing restrictions as early as 1961. Pat Collins had successfully run Brummel’s café in Melbourne’s South Yarra. It was a favourite haunt of artists and performers, including the young Barry Humphries.

Upon moving to Hobart, he found the licensing laws prevented him from establishing a casual eatery where diners could enjoy a glass of wine. The Bistro was established in the neglected basement bar of a central Hobart hotel. Although not strictly a licensed restaurant, drinks could be purchased through the pub above. The Bistro became a meeting place for Hobart’s bohemian set.

In the 1970s, licensed restaurants and BYOs proliferated, offering a variety of cuisines. The Tasmanian Hospitality Association relates that: