It wasn’t called the Ekka then, of course. The Intercolonial Exhibition of 1876 was the first exhibition of the National Agricultural and Industrial Association of Queensland, which was formed in 1875. The exhibition took place at Bowen Park. Some 15,000 to 17,000 people attended.

In 1921 the Association was granted a royal warrant from King George V. They became the Royal Agricultural and Industrial Association of Queensland (generally known as the RNA). The first ‘Royal’ Show was held in that year. Since that time, Queenslanders have shortened the Exhibition’s title. Everyone now refers to it as Ekka.

Since 1878 the  showgrounds have hosted sporting events, royal visits and concerts. They  provided the venue for the first manned flight over Brisbane, in 1912, and were the site of Sir Donald Bradman’s international Test debut in 1928. In the year of World Expo 88, an estimated 800,000 people attended Ekka.

It’s primarily an agricultural show, with more than 10,000 animals exhibited. There are  competitions, 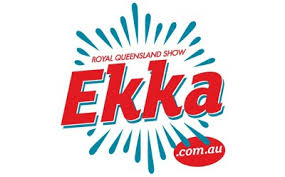 with local and  international judges. For 10 days each August, competitions range from film to cattle, music, dance, cakes, vegetables, fish, cheese and ducks are judged.