The Red Lion Breweries of NSW 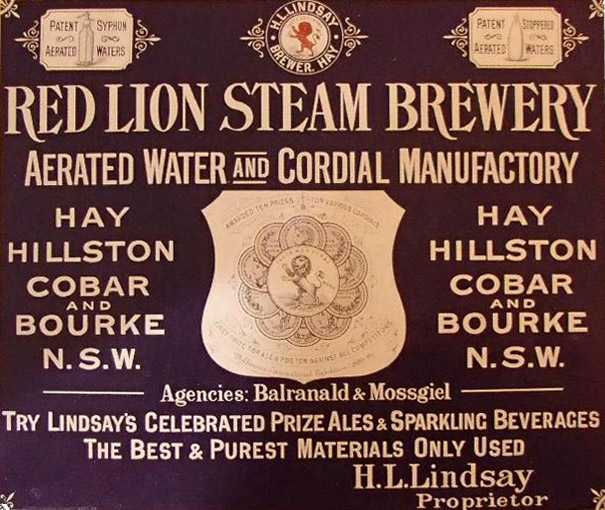 If you’ve ever driven across the Hay plain in southern New South Wales, you’ll understand the locals’ desire for a beer or two. It’s a long, dry trek, especially in the heat of summer. So when Messrs. Elliott and Lindsay acquired the Excelsior Brewery in Hay in 1873, they were onto a good thing. The partners had experience of the brewery trade at Deniliquin, where Henry Lindsay managed Elliott’s Riverine brewery.

On 1 December 1873, a notice in Hay’s Riverine Grazier announced the new enterprise:

Messrs. ELLIOTT & LINDSAY beg respectfully to inform the inhabitants of Hay and District, that they have this day purchased from MR. THOMAS SIMPSON, the brewery and business known as the Excelsior Brewery.

E. & L. trust, by turning out a first class Article, and making Cordials and AErated Waters of Superior Quality, to merit a large Share of the Public Patronage

By 1875 the partners were confidently advertising their ability to supply “first class ales” and a range of cordials at prices well below those for products procured from Melbourne.  That year, however, the partnership was dissolved and in 1876 Henry Lindsay became the sole proprietor of the Red Lion brewery.

The brewery, on the banks of the Murrumbidgee River, became a landmark in Hay and Lindsay prospered. He was prominent in the business life of the town and built a grand house for his large family. The house, adjacent to the brewery, was named Czar Lodge.

Riverboats carried Red Lion ales to other towns along the river, but Lindsay was not content to restrict his manufacturing operations to Hay. More Red Lion breweries were built at towns in the south west of New South Wales, including Bourke, Hillston and Cobar.

In 1880, Lindsay exhibited his wares at the Melbourne International Exhibition, where he won ten prices for his cordials (including gingerwine, cloves, gingerale, peppermint, syrops, soda water, tonic wines and miscellaneous cordials). He also won first prize for his beer and porter.

However, it seems that in time all did not go well for Henry Lindsay. Some reports suggest that the company went into liquidation. His marriage was certainly in trouble and in the 1890s Lindsay left Hay and took a position as a brewer at the Metropolitan Brewery in Melbourne. His wife did not accompany him and reportedly was pursuing him for money. His story ended tragically. On Cup Day in 1895, he fell into a vat of beer and drowned.

The brewery was subsequently sold sold to McIntyre Lincoln & Co., who operated a competing brewery in Hay. They continued to produce Red Lion beers until 1828, while the production of soft drinks continued until the 1970s.