Although John Toohey had produced his first Black Old Ale in an old cordial factory near Darling Harbour, the operation really got going when he and his brother James bought the nearby Darling Brewery in 1872. They established another brewery in Surry Hills in 1875, but didn’t start producing their lager (now called Tooheys New) until 1931.

The Toohey brothers were the sons of Irish immigrants and grew up in Melbourne, where they ran two pubs, the Limerick Arms and the Great Britain. In the 1860s they moved to Sydney and in 1869 John Toohey obtained a brewing licence. Three years later, they purchased the Darling Brewery and three years after that established the Standard Brewery in Surry Hills. 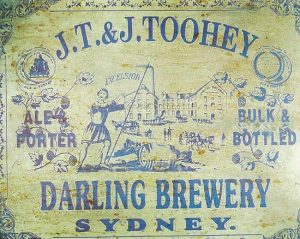 Brewing continued at the Standard Brewery for 80 years until Tooheys moved operations to Lidcombe. Their most popular beer, known as Tooheys New was released in 1931.According to the company website, their stag emblem was inspired by John Toohey’s favourite Sydney pub, The Bald Faced Stag. The pub, in Leichardt, is still going and claims to be the home of heavy metal music in Sydney.

In 1980 Tooheys merged with Queensland-based Castlemaine Perkins to form Castlemaine Tooheys and the operation was purchased by entrepreneur Alan Bond in 1985. The company is now owned by Lion, which in turn is owned by the Japanese company Kirin Holdings.