The term “TV dinners” emerged as a brand name in the USA in 1955, although frozen ready-to-eat meals had been around for more than a decade. In Australia, it seems the first to pick up on the concept were Sydney pie-makers and caterers, Scotts. The newspaper campaign in 1962  promoted their frozen “heat-n-eat” TV dinners as “a wonderful new wife-saving idea”.

‘TV Brand Frozen Dinners’ were introduced in America in 1955, evidently as a way for CA Swanson & Sons to dispose of 235 tonnes of turkey left over from Thanksgiving. The idea of packaging a complete meal in a segmented aluminium tray ready for reheating was inspired by airline meals. Indeed, the first such meals, called “Strato-plates” were made for air travellers as early as 1941.

By the mid-1950s, other American companies were marketing ready-to-eat meals, but it was the Swansons’ decision to call their product TV dinners that saw the concept take off. They sold more than 10 million in the first year of production.

When television arrived in Australia in 1956, it began to change the way people ate. In 1957 The Age featured an article on “Easier TV Meals”. The writer, Anne Mason, focused on the latest appliances to make cooking easier. She stopped short of saying her recipes were for people to eat in front of the TV, but focused on allowing the housewife to watch her favourite program while the meal cooked itself.

“Every day more and more TV aerials are appearing on rooftops as this new medium of entertainment comes into an increasing number of Victorian homes,” Mason wrote. “One of the problems which the housewife has to cope with along with her new TV set is what type of meals will interest the family enough to draw them away from the TV screen.” She recommended Curried Beef Balls, Pot Roast and a Steak and Onion Pie that could be eaten with a fork.

Individual traders were offering complete take-away meals by the early 1960s. I had a note from Lee Rydstrand, a process engineer in the food industry. He told me his maternal grandfather Kevin London opened a take away store in Bardwell Park, Sydney in about 1961, called Kev’s Snacks. It was staffed by his wife and daughters and served up take away meals in aluminium containers: curried prawns and rice, meatballs and mashed potatoes, steak and kidney and mash, each a specialty of one or other of the women and still cooked up at various weddings and birthdays to this day.

“Family lore has it that it did a roaring trade, expanding into supplying local factories and the passing trade from passengers getting off the train,” Lee told me. Unfortunately Kev’s Snacks lasted just 12 months before the advent of Scott’s TV dinners and their sale through Coles put a sudden stop to their business. 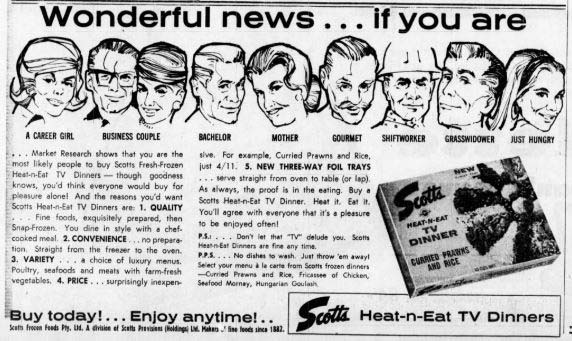 It’s not clear exactly when Scotts ventured into TV dinners, but by 1961 they were claiming to be “leaders in TV dinners and catering packs”, thanks to technology developed by the C.S.I.R.O. The 1962 campaign promoted four roast dinners (beef, lamb, pork and turkey, all with the appropriate sauces) as well as Fricassee of Chicken, Curried Prawns and Rice, Hungarian Goulash, Seafood Mornay and Poached Bream Fillet in Egg Sauce. All except the prawns came with potatoes and peas and cost from 4/11d (just under five shillings or 50 cents) to 9/11d for the roast turkey and cranberry sauce. Meals took about half an hour to heat in the oven. 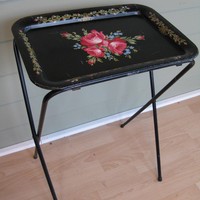 Along with TV dinners came TV tables – folding tray tables that could be arranged in front of each diner to avoid juggling plates on laps. And another Australian invention made a come-back: the Splayd, a multipurpose utensil invented in 1943 but not mass marketed until 1962.

Now known in the trade as “ready meals”, pre-prepared dinners have evolved over the years. New technology has seen boil-in-the-bag meals, microwaveable containers, and pouches promoted with the line “all you need is a fork and a microwave”.  Given that, in 1962,  Scotts said “all you need is a hearty appetite and a knife and fork”, it seems that not everything has changed.