During WWII, a combination of labour shortages, drought and the difficulty in importing goods led to the threat of food shortages. The ‘Dig for Victory’ campaign was launched by Prime Minister John Curtin in January 1942, with Australians encouraged to grow their own vegetables in Victory Gardens and raise chooks (or as they were officially referred to, ‘fowls’). Gardening groups and collectives were formed, with money made from the sale of the excess produce often going to support the war effort.

It wasn’t a new idea. There were Victory Gardens (or war gardens) in the United States, United Kingdom, Canada, Australia and Germany during both  World War I and World War II. Growing fruit and vegetables in your own garden or in public parks was a way to assist in the war effort. 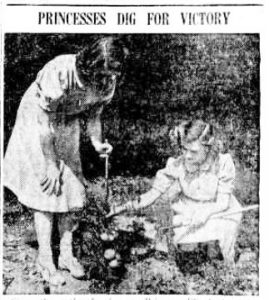 The British ‘Dig for Victory’ campaign in WWII even saw the lawns outside the Tower of London turned into vegetable patches. The British campaign was reported in Australian newspapers, with one story showing Princess Elizabeth and Princess Margaret “digging for victory” on the east terrace of Windsor Castle.

Prime Minister John Curtin launched Australia’s own ‘Dig for Victory’ campaign in 1942 and in July of that year the UWCA promoted ‘Garden Army Week’. The costs of the campaign were born by the individual states, with no Federal funding.  Victory Gardens were considered necessary “on account of the present acute shortage of vegetables caused by drought conditions and heavily increased demands by the fighting services”. The campaign was supported by many municipal councils. Experienced gardeners were urged to share their expertise and make their peacetime hobby their wartime duty.

Digging for victory wasn’t universally approved. In 1943 in Brisbane, there were complaints that farmers’ produce was being dumped because of the quantity of vegetables being grown by home gardeners and gardening groups. However, a shortage of farm labour had an impact on farm production, resulting in the formation of the Womens Land Army. The ‘Land Girls’ carried out tasks including vegetable and fruit growing, pig and poultry raising, dairying and sheep and wool work.