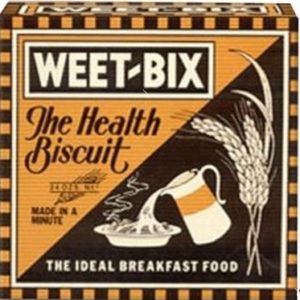 A company called Grain Products Limited added small amounts of sugar and malt to flaked cereal biscuits and launched Weet-Bix in competition to the popular Granose. The company and the brand were acquired by Sanitarium in 1928. Weet-Bix  has been the best selling breakfast cereal in Australia for more than 35 years. A detailed history of its development , written by a descendent of one of the founders, is here.

The Grain Products company was started by Arthur Shannon, who was a member of the Seventh Day Adventist church in Sydney. The church operated the Sanitarium Health Food company which produced Granose, which was completely unsweetened. Purists within Sanitarium resisted adding sugar to the biscuits, leaving an opening for someone to produce a cereal that had more popular appeal. 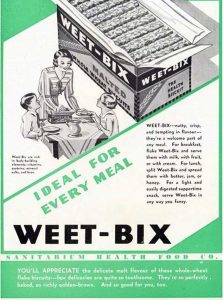 By the 1920s, several competitors to Granose had emerged including VitaBrits from Cereal Foods Limited and other sweeted cereal lines from Kellogg’s and Purina. Shannon enlisted the aid of  baker, Frederick Foots (a former Sanitarium employee) and engineer, Norman Jeffres (a former Cereal Foods employee),  to help him develop a new, slightly sweetened wheat biscuit. The fourth member of the team was Bennison Osborne, a sales and marketing specialist.

The first Weet-Bix factory was in Parramatta Road Leichardt and the product was sold on consignment, delivered weekly to grocers. Weet-Bix was advertised and consumer competitions also helped to promote the brand. It became successful and was affecting the sales of Granose, inducing Sanitarium to purchase the business in 1928.

Shannon may have been pressured to sell by the church hierarchy of the Seventh Day Adventist Church. All the partners in the business were church members and the implication that their business was hurting ‘the work’ of the church could have been  a motivation to sell.

Sanitarium continued to market the product with promotional offers. During the Great Depression, coupons inside the packs could be collected and exchanged for household goods including linen and cookware. In the 1940s the first collector cards were introduced – an example was the “Wonders of the Great Barrier Reef” card set issued in 1946.

They were promoted as “Ideal for every meal”. The advertising copy urged “For breakfast, flake Weet-Bix and serve them with milk, with fruit, or with cream. For lunch, split Weet-bix and spread them with butter, jam or honey. For a light and easily digested suppertime snack, serve Weet-Bix any way you fancy.”