Frank Lowy and John Saunders were two post-war immigrants who initially set up a delicatessen business together in Blacktown in the 1950s. They catered primarily for European immigrants like themselves . They moved on to property development and opened their first ‘American-style’ shopping centre, Westfield Place, with two department stores, a supermarket and 12 shops built around a courtyard. It provided 50 free on-site parking spaces.

The original centre was named because of its location in Sydney’s western suburbs and because of the former rural nature of the surroundings. In the 1960s, Westfield listed on the stock exchange and opened more stores around Sydney, expanding into Victoria and Queensland. 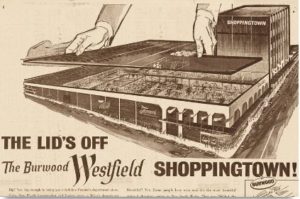 In 1966, a new centre in Burwood, Sydney, was the first to carry the Westfield logo. Dubbed ‘Shoppingtown’, it was the first shopping centre in New South Wales to incorporate a major department store. The first centre in Queensland, at Toombul, followed in 1967, with Doncaster Shoppingtown opening in Melbourne in

In the 70s, the company made its first move into USA. International expansion continued, with the group eventually owning properties around the world. By 2004 it was the largest  retail property group in the world.

The Scentre Group manages every aspect of the properties – from design, construction and development to leasing and retail solutions, asset management and marketing. In response to the challenges of online retailing, the group has tried to reposition its shopping centres as “Living Centres”.  In 2018, Westfield centres outperformed the market, claiming it had increased annual customer visitation by five million to 535 million and annual in-store sales by $1 billion to $24 billion. As of 2020, there were 42 Westfield “Living Centres” in Australia and New Zealand.