This childhood favourite was originally a  paper sachet of sherbet with a liquorice straw. The Wizz Fizz is still made today by Fyna Foods, the Australian company that launched it in 1947, although the liquorice straw has been replaced by a plastic spoon.

Wizz Fizz was originally developed by Arthur Campbell as a fizzy adjunct to a lollipop. The idea was that you dipped your lollypop, known as a Ring Fizz, into the sherbert for that extra fizz. However, according to the company, it became too difficult to get the lollipops into the bags. 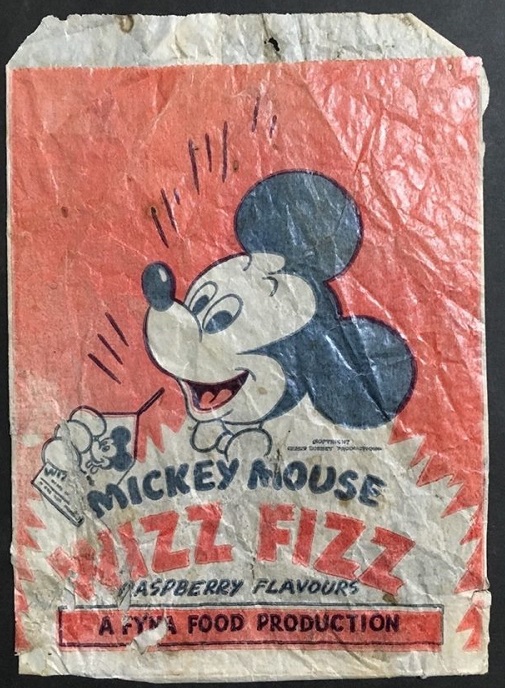 While company history records that the lollipops were replaced by plastic spoons, I believe there was a time when liquorice straws were used. If you look at the early packaging, it seems to depict a straw poking out the top of the bag.  This pack also shows Mickey Mouse, one of several Disney characters used on the bags for decades.

The original agreement with Disney happened in 1955 and the canny Campbell made it a 30-year deal. But when the license came up for renewal in 1985, the new asking price was prohibitively expensive. Wizz Fizz was forced to abandon the Disney connection and invent new monster characters.

In 2017, Wizz Fizz celebrated its 70th anniversary with a series of Halloween-themed events in Melbourne, including a four-day party at Luna Park, an event at St Kilda Town Hall and another at Werribee Zoo.