When the Japanese entered World War II and young Australian men joined the armed services or war industries, there was a shortage of agricultural workers. In response, the Women’s Land Army (AWLA) was formed in July 1942. The ‘Land Girls’ carried out tasks including vegetable and fruit growing, pig and poultry raising, dairying and sheep and wool work.

A recruitment campaign in cities and major towns encouraged women to volunteer for rural work. They signed up either for “the duration” of for 12 months. Although a government agency under the Deputy Director General of Manpower handled the recruitment, the women were paid by the farmers. Their pay was fixed at a minimum of 30 shillings (3 dollars) a week and keep or 50 shillings (5 dollars) a week if keep was not provided. They worked a 48 hour week and were entitled to 12 days annual leave after 12 months. 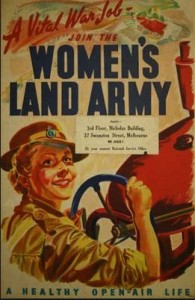 Membership  was open to women who were British subjects (the concept of Australian citizenship didn’t exist until 1948) and between the ages of 18 and 50 years. They were often housed in hostels in farming areas and were given formal farming instruction and supplied with uniforms. By 1944 the Australian Women’s Land Army had around 3000 members.

Women’s Land Army recruits had to work where directed. However, since each state of Australia administered its own scheme, most were deployed within their own state.

Although they were performing important “war work” the Women’s Land Army volunteers were never afforded the same pay and conditions of those in the other services. Agreement was reached in 1943 to recognise them as an official “fourth service”, but the wheels of bureaucracy turned exceedingly slowly. By the time the final draft of these regulations had been drawn up it was 1945. Before they could be acted upon, the war was over and the “Army” disbanded.

As a result, the Women’s Land Army was never considered a military service. The ‘Land Girls’ did not receive the benefits such as the pensions, deferred pay and bonuses, which were available to women who joined WRANS, AWAS and others. In 1997, many became eligible for the Civilian Service Medal, after a Committee of Enquiry recommendation in 1994.