By  1985, American-owned Safeway chain operated 126 supermarkets across Victoria, New South Wales, and Queensland. Woolworths acquired the chain, which put their share of the grocery market above Coles and increased the dominance of the “big two” in the market. The Safeway brand continued to be used for all Victorian stores until 2008, after which it was gradually phased out. The last Safeway store, in Wodonga, closed its doors in 2017. 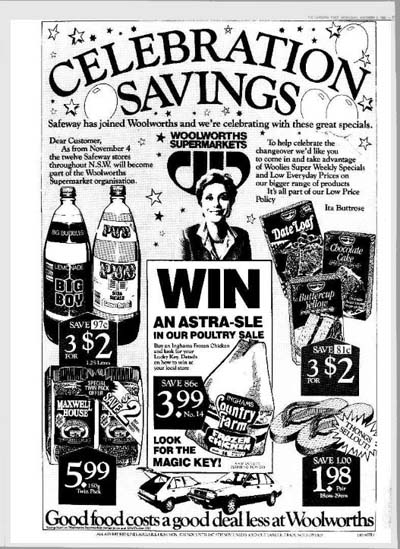 During the first half of 1985, Woolworths had opened 19 new stores in Australia: seven supermarkets, four food stores, three BigW Discount Stores and five Rockman’s stores. The group also owned the Dick Smith electronics chain, which had expanded into the USA.

The Safeway acquisition gave the US company a 19.9 per cent stake in the Woolworths group. It lifted Woolworths’ share of the Australian national retail market from around 8 per cent to 11 per cent. The US company later sold its shares to a New Zealand investment company, Rainbow Corporation, which was itself acquired by Brierley Investments in the late 1980s.

From November 1985, the 12 Safeway stores in New South Wales were re-branded as Woolworths. In 2008, Woolworths announced their decision to re-brand the Victorian stores, but the Safeway brand trickled on in Victoria for another three decades. When the Woolworths slogan “The fresh food people” was introduced in 1987 it was used across both brands.