It took 123 years for the world population to go from one billion to two billion but only 12 to grow from six billion to seven billion. There are expected to be ten billion people on earth by 2083.  October 31, 2011 was named by the United Nations as Seven Billion Day. The growing population has made food security an important issue for the Food and Agriculture Organization of the United Nations (FAO).

A paper produced by the FAO in 2009 predicted that the world population would double in the following 50 years, if the existing growth rate of 1.3 percent continued.  Nearly all of this population increase, the paper pointed out, was likely to occur in developing countries. Most of those people will live in cities – around 70 per cent as compared to 49 per cent in 2009. 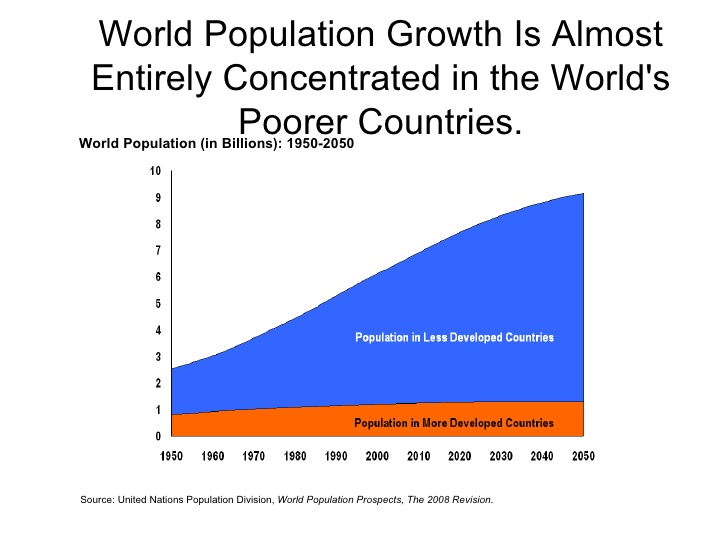 The report argued that the required increase in food production could be achieved if the necessary investment was undertaken and policies conducive to agricultural production were put in place. The FAO expected the demand for food, feed and fibre to grow by 70 per cent in the first half of the 21st century, with further challenges posed by climate change and crops being used for biofuels.  Agriculture will also be forced to compete for land and water with sprawling cities.

The FAO report was cautiously optimistic about the world’s ability to produce enough food for a growing population, but warned that reforms were needed, saying:

The future of agriculture and the ability of the world food system to ensure food security for a growing world population are closely tied to improved stewardship of natural resources. Major reforms and investments are needed in all regions to cope with rising scarcity and
degradation of land, water and biodiversity and with the added pressures resulting from rising incomes, climate change and energy demands. There is a need to establish the right incentives to harness agriculture’s environmental services to protect watersheds and biodiversity and to ensure food production using sustainable technologies.