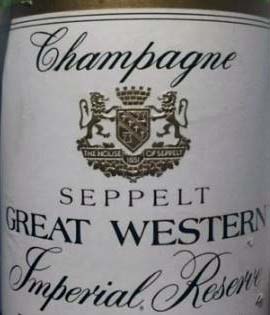 During a visit to the Adelaide Festival in 1966, the Russian poet Yevgeny Yevtushenko evidently acquired a taste for Seppelts Great Western ‘Champagne’. On his way back to Moscow via Paris, he startled the wine waiter at Maxims by requesting Great Western in preference to the many French offerings on their list. Two bottles were procured by sending a runner to the Australian Embassy.

Yevgeny Aleksandrovich Yevtushenko was born in 1932 and began publishing his poetry in Russia in the 1950s. By the 1960s he had become a celebrity outside Russia and in 1966 performed his work as part of Writers’ Week at the Adelaide Festival. He was invited to Australia by the writer and critic Geoffrey Dutton, who was one of the founders of the Festival. Dutton writes in his autobiography, Out in the Open, about Yevtushenko’s capacity to drink. It seems that, unlike many of his compatriots, the poet did not drink vodka and preferred champagne.

At that time, before the French successfully lobbied for worldwide protected D.O.C. status, Seppelts was happy to call its Great Western sparkling “Champagne”. Yevtushenko took a great liking to this local drop.

Dutton tells of an episode at the famous Maxims restaurant in Paris, on Yetushenko’s return journey. A fan had taken him to dinner and the sommelier presented him with a wine list “the size of the Holy Bible”, asking him which champagne he would like to drink. It seems the poet looked through the list and said, “The champagne I want is not here.”

Here’s how Dutton tells the rest of the story:

The sommelier was stunned, but rallied and asked which champagne Yevtushenko wanted. Zhenya [Yevtushenko’s familiar name] said firmly, “Australian Great Western”. Maxim’s immediately despatched a runner to the Australian Embassy to ask if they had any Great Western. Some years after Yevtushenko told me this story, it was confirmed when I met a man who had been one of the secretaries at the Embassy, and was detailed to get a couple of bottles for Maxim’s.

According to Zhenya, when the messenger came back and handed over these bottles, a little man dining by himself at one of the other tables called the sommelier over and said he would like to try a bottle. The sommelier regretted, but this was impossible. Zhenya, on hearing this, asked the man over to have a glass. It was Aristotle Onassis.