Prior to 1982, yoghurt was consumed mainly by recent immigrants and health fanatics. It was largely sold by health food stores and viewed as a bit weird.  Yoplait  Yogurt was the largest selling brand in France and was licensed in Australia by Plumrose. It was launched with a range of fruit flavours, using the line “It’s French for yogurt” and revolutionised the yoghurt market in Australia. 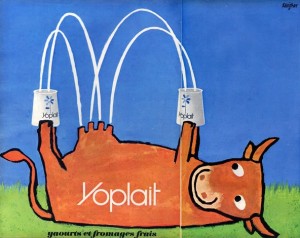 No, Yoplait is not the French word for yoghurt. Any French/English dictionary will tell you that the actual word is yaourt.  The line “Yoplait. It’s French for yogurt” was, in fact, my invention – an advertising line designed to express the fact that Yoplait was the largest selling brand in France.

The brand had its origins in 1965, a year after French dairy farmers formed a cooperative known as  the Sociéte de Diffusion de Marque, or Sodima for short. Yoplait Yogurt was launched in Paris  on Sept. 25, 1965. One of the early advertising campaigns was a little bizarre, featuring a recumbent cow. The brand was subsequently launched in Switzerland in 1969, in the United States in 1976 and now sells in many countries around the world.

This is how it happened.

It was towards the end of 1981 and there was a Big Project afoot at advertising agency, Clemenger. Our client Plumrose, best known at the time for “ham in a can”, was cooking up plans to launch a new food product that would change the way Australians ate. Unfortunately it was so secret that they couldn’t tell us what it was. Media and marketing plans had to be submitted for “Product X”. Finally, the time came to develop the television campaign and we gently pointed out that, at this point, they probably had to trust us with the name and nature of their product.

Sworn to secrecy, we gathered to take the brief. It was revealed that the new product was Yoplait Yogurt (yes, yogurt without the “h’), that it was the leading brand in France, and that it was to be sold in a revolutionary twin pack. Yoghurt, at that time, was not a mainstream food. The average annual yogurt consumption in Australia was just 0.9 kilograms per head. Yoplait, with its creamy texture, sweet taste and large fruit pieces, would change all that.

Before that could happen, though, we needed a campaign. How could we get this product with the funny French name into Australian shopping trolleys?  I’m not sure when it occurred to me that the twin pack looked a bit like the Arc de Triomphe, or that positioning the product in the middle of that famous Paris intersection would be a great attention-getting device. Then the art director suggested having a child use the twin pack as a pair of binoculars. We decided on a gendarme as our presenter and tied the whole idea together with the line “Yoplait. It’s French for yogurt’.

Perfect. Except that there was a little sideshow happening in the southern Pacific called the French nuclear tests. Back in 1974, atmospheric tests over Mururoa had been halted after international legal action and a boycott of French products in Australia and New Zealand. People got carried away and even boycotted goods with French names, like croissants, even though they were made by perfectly respectable Australian bakers. Legitimate targets like Beaujolais and Club Med also felt the pinch.

Despite bowing to international pressure on atmospheric tests, the French had continued with underground tests, and were still doing so. Research groups were hastily convened and moderators probed group members for negative reactions. None were forthcoming. I had written myself a trip to Paris.

In Paris, the agency team, the client and the crew stayed at the Hotel Lutetia, an art deco monstrosity (since restored to something of its former glory) on the Boulevard Raspail on the West Bank. Appropriately, this was where the dairy farmers had convened to create the Sodima co-operative back in the mid-‘60s.

The shoot had a few tense moments, especially on the final day when dark clouds began to gather. The budget had no allowance for another day’s shooting. The client was becoming agitated, stopping just short of asking us to get on the phone to God. The Chef Electricien just shrugged and wheeled out the HMIs (huge arc lights) and turned on artificial sunlight. Aaahhh…the magic of television.

In September 1982, Yoplait was launched in Australia. The combination of the advertising, the unique packaging, and the professional pitch to the supermarkets that resulted in a completely new layout of their dairy cabinet, made the new product an instant success. In fact, advertising had to be curtailed because the factory in Echuca couldn’t keep up. Australians began eating yoghurt in unprecedented quantities and by 1999 consumption per head had risen to more than six kilograms.