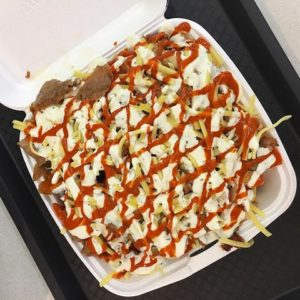 Such was the popularity of the HSP that in December 2015 it inspired a Facebook group called the Halal Snack Pack Appreciation Society, where members could leave reviews of their favourite snack packs. The group (as of January 2017) had 179,080 members.

Among the fans was Labor Senator Sam Dastyari who famously offered to treat right-wing anti-Islam Senator Pauline Hanson to an HSP in Sydney’s western suburbs. Of course she said no, claiming (without any evidence) that 98 per cent of Australians were also against halal. The Labor Party certainly isn’t. In Perth, prior to the federal election, a record eight metre long snack pack was the highlight of a party fundraiser.

Although the fame of the snack pack has rocketed in the last few years, its heritage goes back a lot further. Kebab shops have been around in Australia since the mid-60s and proliferated in the 1980s. It’s not clear who first served the kebab components over chips in a polystyrene tray, but the South Australians are claiming it as a local invention. Only it’s not called a halal snack pack. Over there, where they do things differently, it’s called an AB. If you really, really want to know what that stands for, follow this link.  Be warned, it’s not pretty.

There is disagreement in Adelaide about who did it first. Tony Formato from the Blue and White Café in O’Connell Street, North Adelaide, claims he invented the AB in 1989, inspired by the order of one of his regulars, a theology student who always had chips, meat and garlic sauce. Yanni (John) Delvizis, owner of the North Adelaide Burger Bar (aka the Red and White) disputes this, claiming his predecessors at the café invented the dish (but not the AB name) in 1979.  Given the ethnic origins of these café proprietors, their snack packs may or may not be halal.

The HSP seems to be taking its place among other distinctively Australian foods with multicultural overtones, following in the tradition of the dim sim and the Chiko roll. As the Macquarie Dictionary people said: “The significance of halal snack pack is that it tells us about something once confined largely to the Muslim community that is now surfacing throughout the broader Australian community.”