This famous coffee lounge,  in the popular seaside resort on Victoria’s Great Ocean Road was opened by brothers Graham, Alistair, and Robin Smith. The Arab was modelled on European coffee bars and its espresso machine was only the third in Victoria. It was popular with bohemian types who thought they were sooooooo cool.

Lorne, on Victoria’s south coast, started to become popular as a seaside resort with the opening of the Great Ocean Road in 1923. The road, constructed as a memorial to those killed in World War I, was originally a toll road. The charge was two shillings for motor cars and 10 shillings for wagons with more than two horses.

The town’s genteel seaside image was disrupted by the arrival of The Arab in 1956. Dr Malcolm J. Turnbull  (not our former PM, but a historian who has documented the Australian folk music scene) describes it this way:

“…a long narrow eatery, an avant-garde structure of bluestone, glass and canvas which modelled itself on European coffee bars. Its espresso machine was only the third of its kind in Victoria. Bikini-clad waitresses served cappucino, milk-shakes, toasted sandwiches, pasta and a range of colourfully-titled desserts (the “Porgy and Bess” and “Harem Girl” sundaes among them) to Toorak surfies or to holidaying students who sprawled on cushions discussing poetry and Plato, debating world issues or listening to music (canned or live).” 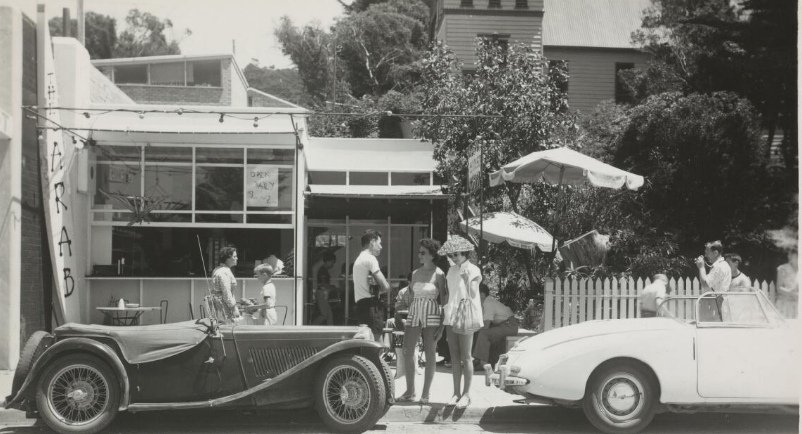 According to the National Times:

It was the days before big jets, when anything other than Fletcher Jones trousers, Smokey Dawson and meat pies was considered exotic. Here was a place that offered a smattering of styles, Italian cafe society mixed with the American beat scene as well as a novel bit of Australiana – perving on near naked and unattainable beachgirls [National Times, 15 Feb 1981]

The Arab even inspired a local balladeer, Hayden Rickey, to rhyme:

This is where in ‘58
In a summertime of fun
We scattered cushions on the floor
Then sat upon our bum
This is where the action was
The coffee strong, the best
Where plans were hatched for conning birds
Then practised with much zest.
This was where the “Spinning Wheels”
Having played “Wild Colonial Club”
Relaxed by eating bowls of spag
Too weary to stand up.
I live at Lorne all year through
And write and pound the beat
I try to pass the Arab’s door
But can’t control my feet.

The aforementioned ‘Wild Colonial Club’ was a dance hall in the old picture theatre, also run by the Smith brothers. Inspired by the success of their Lorne ventures, the brothers then took to the snow. The Abominable (also known as the A-bomb or the Ab) at Mount Buller opened in 1964 as a licensed restaurant and late-night music venue.

According to The Age, there were sometimes as many as 300 people dancing until 3 or 4am.  And what dances.  The Age article reported:

The slop, the mashed potato, mod, nod, hitch-hiker, the swim, the frug and a dozen other indescribable dances are performed to the thumping beat of drum and guitar emanating from the inevitably hirsute group on the platform. The Age, 15 July 1966.

The Abominable, now known officially as the ABOM, evolved into a hotel as well as a restaurant and is still operating at Buller.  The Arab continues at Lorne, although recent reviews have been less than kind. Still, it’s a piece of history that many a coast-goer would want to see preserved.