Swallow and Ariell claimed to be the first biscuit company in Australia. The company was founded by Thomas Swallow in 1854. He took a partner, Thomas Ariell and they established a factory in Port Melbourne (then known as Sandridge). Swallow & Ariell began by manufacturing ship’s biscuits, but grew to be the fifth largest biscuit company in the world, with over 150 varieties.

Thomas Swallow  emigrated from England to California in 1848, during America’s gold rush. After the discovery of gold in Australia he travelled to Victoria and, according to the company history, the poor quality of food on the voyage prompted him to start a business manufacturing ship’s biscuits. Swallow may have learnt something of the trade in his home town of Reading, which was well known for biscuits produced there.

Little baking was done on board the sailing ships of the era. Swallow supplied all the ships arriving in the Melbourne port during the busy gold rush years. His was also the first biscuit company to produce fancy biscuits. An employee recounted his memories of those years, saying: 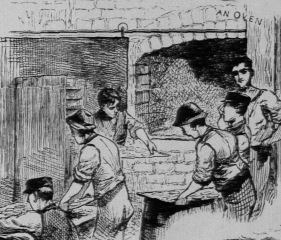 “We made fancy biscuits for town and country delivery…I used to do Williamstown on horseback…Before the railways were opened up the goods all went up country by team, generally bullock teams. You would see the drays and wagons backed in, the bullocks lying down, chewing the cud, all along Elizabeth, Swanston and Flinders Streets.”

Swallow & Ariell expanded into fruit growing and processing in Victoria and sugar plantations in Queensland. They also made plum puddings and cakes. An advertisement reminded customers that “Swallow and Ariell were awarded first prizes for their brides’ cakes at International Exhibitions held in Paris, Philadelphia, Calcutta, Sydney and Melbourne”.

Among the well-known Swallow & Ariell brands were Uneeda, Marie Biscuits and Melba Wafers. The company remained in family hands for more than 100 years but was taken over in 1964 by the Australian Biscuit Company. This was incorporated into Arnotts and Australia’s first biscuit company was no more. The Swallow & Ariell brand disappeared, but the Port Melbourne factory building remains, now converted for residential use.