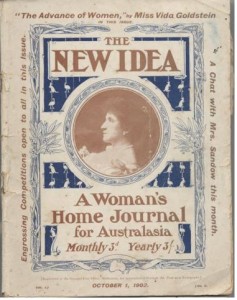 Australia’s oldest women’s magazine was launched by Thomas Shaw Fitchett as The New Idea — A Women’s Home Journal for Australia. Its cookery columns have influenced generations of Australians.

The first issue of New Idea concerned itself with much more than cookery, with articles on women’s suffrage and on Australia’s Dame Nellie Melba. Other articles dealt with fashion and health. Despite acknowledging the feminist movement, the magazine was promoted initially with the cry “Men! Buy this issue for your wives”. 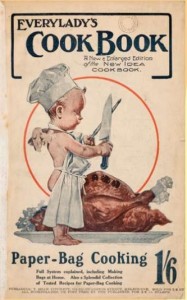 In 1911, the name of the magazine was changed to Everylady’s journal but in 1928 it was changed back to New Idea. Fitchett Brothers published a range of magazines and books.  . Among them was the new and enlarged edition of the New Idea Cook Book, titled Everylady’s Cook Book. It was published around 1911,  when the craze for paper bag cookery was at its height. The cover picture is truly alarming. What is that baby doing with that knife?

Fitchett Brothers subsequently adopted the name Southdown Press. In the 1930s  they published a range of comics, including the Australian editions of Buck Rogers. Southdown was acquired by Keith Murdoch just after WWII and, on his death in 1952, became part of Rupert Murdoch’s media empire. In 1979, Murdoch recruited Margaret Fulton to become cookery editor of the magazine. She remained in the position for two decades.

In 1991 Southdown Press became Pacific Magazines and Printing. Although the circulation of the print magazine has declined over the years, the brand has developed a strong online presence.  The magazine now bills itself as “Australia’s most successful women’s entertainment brand” and has a strong focus on celebrity gossip.

In 2019, the online platform New Idea Food was launched, focusing on video content. It was subsequently expanded into a print version, of which the publisher said: “The 116 page print version of New Idea Food offers more than 90 recipes to feed the family and entertain friends; we have step-by-step cooking, masterclasses, quick and easy meals, helpful food hacks and hints, in-season produce ideas and reviews.”